ECHO's compilation of good practices contributes to resilience in the Caribbean 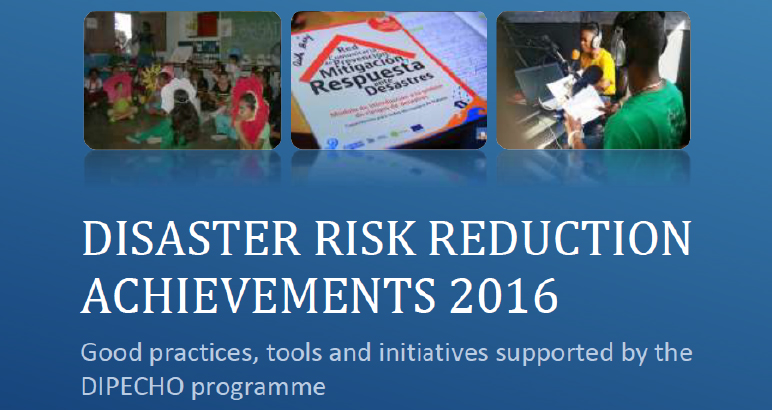 Panama City, Panama 28 February 2017—The Disaster Risk Reduction Achievements 2016, a new publication compiling 50 good practices, tools and initiatives supported under the framework of the 2015-2016 DIPECHO Action Plan was recently launched with the purpose of contributing to the implementation of the Comprehensive Disaster Management (CDM) Strategy 2014-2024 and the Sendai Framework for Disaster Risk Reduction 2015-2030. All initiatives in the publication are associated to one of four thematic focus areas: Early Warning Systems, Communicating Disaster Risk Reduction (DRR), Information & Knowledge Management and Institutionalization of DRR. The publication facilitates DRR information sharing which enables amongst others joint planning and programming.

Some of the good practices, tools and initiatives were presented in the CDM Signature event on DRR achievements and priorities in November 2016 in Barbados. In this occasion, Ms. Andria Grosvenor, CDEMA´s Planning and Business Manager, highlighted their importance for the implementation of the Comprehensive Disaster Management (CDM) Strategy 2014-2024. She provided and overview how these achievements will contribute to future action: “The Road Map on Seismic Risk Management is very critical for the region as there is a need for the strengthening of planning arrangements regarding seismic risk and as such CDEMA will be moving this Road Map forward. The work undertaken by different stakeholders related to Early Warning Systems (EWS) contributes to the 4th Outcome of the CDM Strategy “Strengthened and sustained community resilience”. The regional EWS workshop findings and recommendations shall be the basis for ongoing and new initiatives. CDEMA is in the process of preparing a project proposal which will for example speak to the need to include vulnerable groups in all stages of the EWS. Furthermore, CDEMA will be working with UNISDR to incorporate the process of updating the 13 existing DRR country documents into the country work programming of the CDEMA Participating States.

Ms. Grosvenor also referred to the Strategic Targeting Methodology (STM), was developed by IFRC, that aims to facilitate the selection of communities for disaster risk reduction interventions by any stakeholder (e.g. Government, NGOs, Red Cross etc.).  The methodology ensures a transparent, consistent and documented process that reduces external influences and power dynamics in decision-making that leads to the selection of communities for community interventions.  This tool has been implemented by three of the CDEMA participating states (Suriname, Grenada, Saint Vincent and the Grenadines, Jamaica) and was handed over to CDEMA in July 2016, to be used as the key tool in selecting communities for DRR interventions in all CDEMA member states.

Acknowledging CDEMA´s leading role in disaster risk management in the Caribbean region, Ms. Virginie Andre, ECHO´s Technical Assistant for the Caribbean, encouraged all stakeholders to ensure that all efforts and contributions made related to DRR be geared towards the work of the national and regional leaders in DRR and that investments are made in the areas where they are needed the most.

The Disaster Risk Reduction Achievements 2016 publication refers to many more successful initiatives at local, national and regional level. Some of the successes in Haiti include the introduction of the Safe Hospitals Initiative, including a true binational cooperation with Dominican Republic; the process related to the DRR country document engaging all relevant DRR stakeholders working in Haiti and strengthening especially the collaboration and coordination between civil society organization and the national system. Another DRR success example can be seen in the communication area with the radio drama TIM TIM, which was developed by Oxfam in Haiti, broadcasted key messages on risk preparedness covering themes such as cholera, DRR and family planning.

ECHO is currently supporting drought preparedness initiatives in Latin America and the Caribbean region to respond to the needs expressed by the countries. In the Caribbean, activities started in 2016 and focus on Cuba, the Dominican Republic and Haiti. New DIPECHO projects will start in April 2017 in the Caribbean, Central and South America.