How is the region of the Americas and the Caribbean demonstrating disaster preparedness and disaster risk reduction? 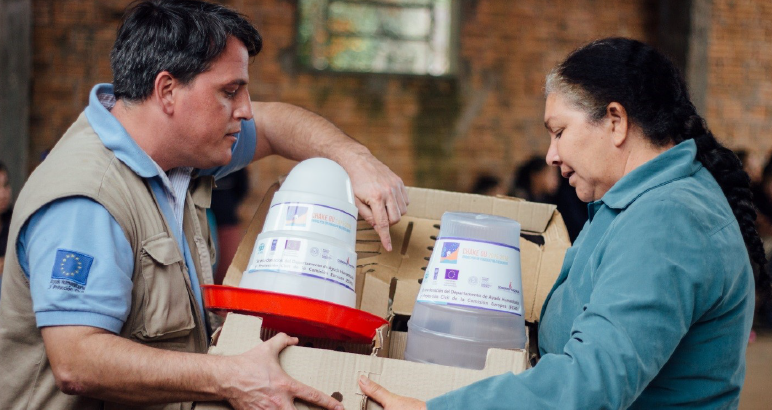 By: Guadalupe Natareno, United Nations Office for Disaster Risk Reduction - Regional Office for the Americas and the Caribbean.

PANAMA CITY, Panama, August 1, 2019 - On January 10, 2018, a 7.6 magnitude earthquake with an epicentre located 220 kilometres of the East coast of Honduras in the Caribbean Sea, triggered a tsunami warning in several countries of Central America, including Honduras, where the effectiveness of the Tsunami Warning System was tested and confirmed in the town of Omoa. This demonstrated how preparedness, mitigation and response are important in alerting and taking action in this type of situation, particularly when an entire community of over 2,500 may be affected.

In 2017, Omoa received the Tsunami Ready certification after meeting the tsunami preparedness, mitigation and response requirements established by the United Nations Educational, Scientific and Cultural Organization (UNESCO), just a year before the system was tested by a real tsunami warning. The requirements, met in 2016, include tsunami mitigation maps, tsunami preparedness guides for the population, annual preparedness, evacuation activities and exercises, tsunami response guides, and strategies for the dissemination of all tsunami guides and warnings to the community, among others. The implementation of a Tsunami Early Warning System was also included.

This is not only a simple recounting of events but evidence that demonstrates how disaster preparedness and disaster risk reduction (DRR) make a difference. This evidence was systematized in 2018 through the Regional Workshop entitled "Disaster preparedness makes the difference: Contributions from ECHO and its partners to the strategies in the Latin America and Caribbean region" held in Cartagena, Colombia.

Evidence
What is evidence? Is it just something that contributes to DRR? The United Nations Office for Disaster Risk Reduction (UNDRR) and the European Commission's Humanitarian Aid and Civil Protection department (ECHO) define evidence of disaster preparedness and DRR as the combination of expertise, proven functionality and community participation, as well as the use of tools, efficient techniques and scale, that constitute improvements as confirmed by community testimonies and tests carried out post disaster which serve as examples of improvement and recovery for future disasters. In addition, it must demonstrate how the existing risk has been reduced, how the creation of new risks has been avoided or how the capacity to respond to an emergency has been improved.

Some evaluation requirements for evidence are that it must be expressed through the voice of the community, present concrete facts and data, and relate to one of the Sendai Framework for Disaster Risk Reduction 2015-2030 priorities for action, among others.

Jocelyn Lance, Head of the ECHO Regional Office for Latin America and the Caribbean points out that"one of the things that we have learned over these more than 20 years of disaster preparedness and DRR in the region is the need to capture evidence especially when an action makes a difference. We extend an invitation to all those who want to submit their evidence of actions and mechanisms that make a difference in disaster risk reduction."

We want to see your evidence
UNDRR and ECHO have opened the call for evidence on disaster preparedness and DRR to the entire region of the Americas and the Caribbean starting this month and closing in December 2020. The entire region therefore is invited to participate by submitting and sharing evidence in audio-visual, text or any new format through the different UNDRR platforms for the Americas and the Caribbean: web page (through a  form), social networks (Facebook and Twitter with the hashtag #EVIDENCEDRR ) or email.

Raúl Salazar, Chief of the UNDRR Regional Office for the Americas and the Caribbean states that "this call is to identify evidence-based disaster preparedness and DRR experiences that make a difference through an evidence-based approach. The main objective is to identify the contributions of partners to strategies targeting the Americas and the Caribbean that can be identified as an experience and good practice that has had an impact either on the work of the communities, on the actions, the processes or decision making at the regional, national or local level."

The main goal of this call for evidence is to demonstrate the impact of activities and projects framed within the contributions of ECHO and other key partners in the region of the Americas and the Caribbean, through both qualitative and quantitative evidence proving that disaster preparedness and DRR make a difference in the event of a disaster.  This call seeks not only to highlight the importance of DRR in the region but also to highlight that disaster preparedness is everyone's business.

Find all information on how to share your evidence and about evaluation requirements here: http://dipecholac.net/preparacion-ante-desastres/evidencias/eng/index.html

This project is possible thanks to ECHO's financial support.