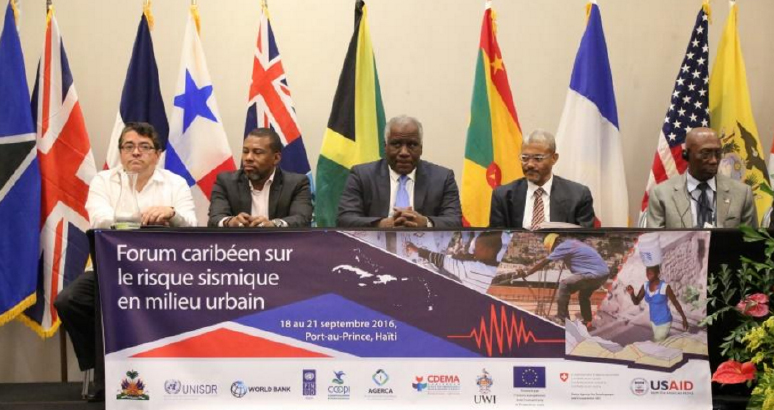 BRIDGETOWN, Barbados, 12 January 2017 - Today January 12, 2017 marks the 7th anniversary of the magnitude 7.0 earthquake that devastated Haiti. The earthquake affected over 3 million people and claimed up to 150,000 lives.

Earthquakes rank among the highest in potential to cause the most destruction in one event in the Caribbean. Many countries within the Caribbean Region are threatened by future large earthquakes which will occur when strain accumulation on segments of the adjacent tectonic plate boundary exceeds breaking point.  To a large extent, the resulting damage will depend on the choice of risk management measures that are implemented to evade or reduce vulnerability to strong ground shaking.

In his closing speech to the Forum on the regional roadmap, the Minister of the Interior and Territorial Authorities of Haiti welcomed this great initiative that will allow for cooperation between institutions and their countries to deal with a common and permanent problem. He emphasized the importance of managing seismic risk in urban areas as the region faces explosive development of rampant urbanization, which adds to the vulnerability of smaller States.

The Regional Roadmap will assist stakeholders from local, national and regional levels as well as public, private and civil society sectors to identify, implement and report on actions taken in their various spheres of work related to risk governance, understanding urban seismic risk, mitigation and preparedness, response, recovery and reconstruction, public awareness and education, risk finance and transfer, and business continuity planning.

Mr. Ronald Jackson, Executive Director of the Caribbean Disaster Emergency Management Agency (CDEMA) lauded the Urban Seismic Risk Forum as a great success. He highlighted the role of CDEMA in the pre-workshop shaping of the Roadmap which was a key output of the deliberations. “I would like to reiterate CDEMA’s support for the utilization of the Roadmap from a regional lens, including the coordinating, monitoring and reporting scope of involvement in the future”. Mr. Jackson further indicated that institutionalization of the Roadmap has commenced with CDEMA in acknowledging the roles that the Regional Technical Working Group (RTWG) and the Physical and Environmental Planning Sector Sub-Committee (PEPSSC) will play going forward.

“There is certainly evidence that the operational coordination capacity for adverse events has improved in Haiti. However, we still lament the fact that building standards have not advanced at the pace to ensure that new construction is more resistant to seismic events certainly of the magnitude Haiti experienced on January 12, 2010. The Road Map presents an opportunity for this issue to be advanced both at the policy and programmatic level within Haiti so that in the future we may see a drastic reduction in mortality to earthquakes” said Mr. Jackson.

This Regional Roadmap was developed against this background along with challenges such as poor risk governance, insufficient preparedness, the need for improved scientific knowledge in order to refine regional natural hazards maps, ineffective building regulation framework, limited enforcement of building codes/standards and natural hazards damage mitigation as part of the planning system and inadequate risk financing.

Mr. Ricardo Mena, Head of the Regional Office -The Americas of the United Nations Office for Disaster Risk Reduction (UNISDR) in his reflections on the Caribbean Seismic Risk Forum and Regional Roadmap commended the Region and the Government of Haiti for taking the initiative to work towards increased resilience in urban areas and the implementation of the Sendai Framework for Disaster Risk Reduction 2015-2030. In relation to the main outcome of the Forum, Mr. Mena invited national authorities, experts and civil society to work together in the Regional Roadman’s implementation and in identifying key next steps that stakeholders should undertake in order to achieve progress in the Caribbean on urban seismic risk management and on global initiatives such as the Resilient Cities Campaign.

Experts from across the region including the Haitian state agencies, The University of the West Indies Seismic Research Centre, the Council of Caribbean Engineering Organizations, the Mona Earthquake Unit, the Puerto-Rico Seismic Network and representatives of National Disaster Management Organizations provided guidance on the state of play along with recommendations of key next steps to improve the current status of urban seismic risk management in Caribbean countries.

Dr. Richard Robertson, Director of the Seismic Research Centre remarked that the Regional Roadmap is a necessary guideline for the critical measures and actions needed to counteract the security threat that earthquakes pose to sustainable development.


“It provides the basis for the kind of concerted action that is needed by a wide range of stakeholders in the region.  In any Caribbean island, a much larger proportion of the buildings and infrastructure were likely built before effective seismic codes were implemented and less than 2% of this stock is replaced per year.  For this reason, the threat of damage to any one nation is potentially catastrophic”.

“As one of the pioneering agencies engaged in the gathering of seismic data and research on seismic hazards in the region, our Centre stands ready to give our full support to the implementation of the roadmap”, said Dr. Robertson.

Mr. Fritz Deshommes, Rector of the State University, for his part stressed the roles and responsibility of the actors to give importance to scientific research as the basis for the decision-making process. “The University, the State, the technical and financial partners, and civil society entities, must work in symbiosis for efficient seismic risk reduction action in urban areas in the Caribbean region”, he stated.

Extensive promotion of the Roadmap among stakeholders will be critical to the achievement of progress in the region. The way forward will require coordination of efforts at all levels to ensure optimal use of both human and financial resources. As indicated in the Roadmap, there are actions that can be advanced within the programmes of technical partners. Support from development partners will be paramount for the region as well. Agencies such as the Association of Caribbean States, the Autonomous State University of Haiti, the Laboratory and the Disaster Management System in Haiti have also provided an indication of roles that their institutions can play towards implementation.

Significant guidance and inputs at both the preparatory and finalization stages of the Regional Roadmap were made by CDEMA and the Seismic Research Centre (SRC) of the University of the West Indies (UWI). Support for the Forum was provided by the Government of Haiti, the National System for Disaster Risk Management and the Directorate of Civil Protection (DPC/ SNGRD),  the National Office of Maritime Service (SEMANAH), the National Laboratory for construction (LNBTP), the United Nations Office for Disaster Risk Reduction (UNISDR), the United Nations Development Programme (UNDP) in Haiti, L'Alliance pour la Gestion des Risques et la Continuité des Activités (AGERCA), Cooperazione Internazionale (COOPI) and the World Bank (WB).

The Regional Roadmap for Urban Seismic Risk Management in the Caribbean was financially supported by the European Commission's Humanitarian Aid and Civil Protection department (ECHO) under the 2015-2016 DIPECHO Action Plan for the Caribbean. Support was also provided by the Swiss Cooperation and the Office of U.S. Foreign Disaster Assistance (USAID/OFDA)