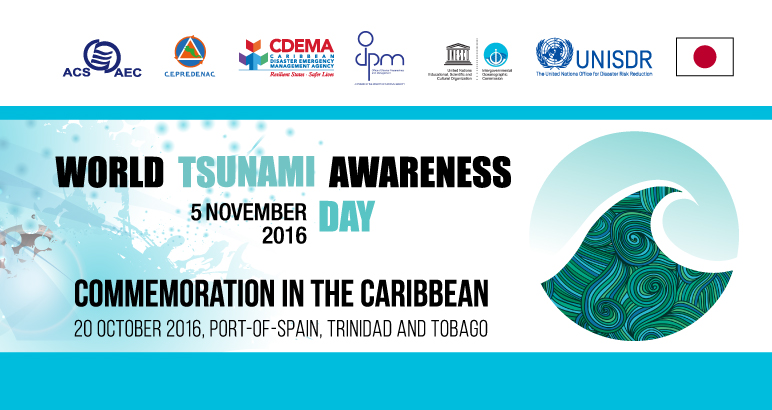 PORT OF SPAIN, Trinidad and Tobago, Wednesday 19, October 2016 – The commemoration of the World Tsunami Awareness Day in the Caribbean will take place on 20 October 2016 in Trinidad and Tobago, back-to-back to the Special Committee Meeting of the Disaster Risk Reduction of the Association of Caribbean States (ACS). The event will count with the participation of representatives from the ACS member states, the Government of Japan and intergovernmental organizations; such as Dr.June Soomer, Secretary General of the ACS and Mr. Ronald Jackson, Executive Director of the Caribbean Disaster Emergency Management Agency (CDEMA), among others. The identification of activities for upcoming WTADs in the Caribbean at regional, national and local level is expected during the event.

Although tsunamis do not occur very frequently, they can cause huge disasters; as the 2004 Indian Ocean which affected 14 different countries and resulted in more than 227.000 casualties. The Caribbean is a vulnerable region to earthquakes and tsunamis, in such a way that is expected that one destructive tsunami will take place every fifty years. There is currently a major effort to build upon and reinforce initiatives that aim to strengthen tsunami resilience such as the Caribbean Hazard Mitigation Capacity Building Programme (CHAMP), the Tsunami Smart Campaign launched by CDEMA, in conjunction with the UWI Seismic Research Centre as well as the efforts undertaken by the Intergovernmental Coordination Group for the Tsunami and other Coastal Hazards Warning System for the Caribbean and Adjacent Regions (ICG/CARIBE).

For the first time, World Tsunami Awareness Day (WTAD) will be commemorated all around the world in order to raise awareness on the importance of tsunami preparedness and to reaffirm the inherent links between disaster risk reduction and sustainable development. This year the events will focus on effective education and evacuation drills. One example from the Caribbean and Adjacent Regions is the Caribe wave, which happens every year.

WTAD aims to raise public awareness of the deadly threat posed by tsunamis and share innovative approaches to reducing risk. The worldwide events, supported by the Government of Japan, will be an opportunity to showcase good practices related to Tsunami readiness and will support the implementation of the Sendai Framework for Disaster Risk Reduction 2015-2030 as well as the Comprehensive Disaster Management Strategy 2014-2024, contributing to greater risk understanding and reduce mortality, among others.

The commemoration in the Caribbean region will be jointly organized by UNISDR, UNESCO/IOC, the ACS, CDEMA as well as CEPREDENAC.