New project to create resilience culture in the Caribbean

The recently started project will contribute to strengthening DRR monitoring capacities at national and regional levels in the Caribbean. 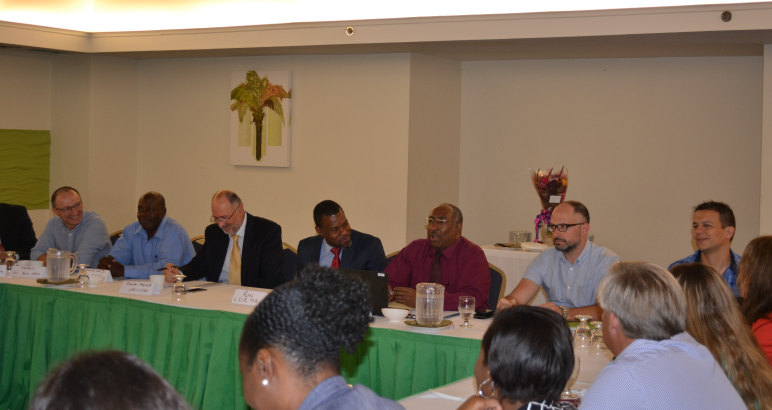 The Caribbean is region prone to different natural hazards such as earthquakes, hurricanes, floods, tsunamis and others. Most countries are Small Island Developing States (SIDS) which can be disproportionately affected by disasters due to their unique vulnerabilities. Climate change exacerbates the effects of disasters.

The recently started project will contribute to strengthening DRR monitoring capacities at national and regional levels in the Caribbean; increased knowledge and capacities for local resilience and community safety through enhanced capacities and commitment for safe schools and enhance risk-sensitive business investment.

When announcing the project, Ricardo Mena, Head of the Regional Office of the Americas of UNISDR, highlighted the importance of projects of this nature due to its "contribution to the timely implementation of the Sendai Framework, applying an inclusive approach to disaster risk reduction involving key actors at regional, national and local level. He mentioned further that the harmonization of the 2014-2024 Comprehensive Disaster Management Strategy indicators and monitoring system with the Sendai Framework for Disaster Risk Reduction will facilitate national and regional reporting to both frameworks and is showcasing a good practice in the Americas region. This initiative is co-funded by European Commission Directorate General for Humanitarian aid and Civil Protection (ECHO).


Likewise, he made a call for all participants to promote an integrated vision where "disaster risk reduction and the adaptation to climate change are components that must be tackled together in order to effectively contribute to increasing resilience in each and every community within the regions vulnerable to disasters such as the Caribbean" he added.

In welcoming the prospects of this new project, Ronald H. Jackson, Executive Director of CDEMA said that the partnership on this project will directly contribute to the delivery of The Caribbean Comprehensive Disaster Management Strategy 2014-2024 which is the roadmap being utilized by CARICOM Member States towards the realization of the Safer More Resilient and Sustainable Communities. "This project is in keeping with the philosophy of Comprehensive Disaster Management of engaging all sector of our society in the effort to build a culture of safety. The initiative will assist CDEMA to further its previously established programme for Safe Schools in the Caribbean and strengthen efforts to engage with the private sector on Disaster Risk Management Issues."


He further hailed the partnership between CDEMA and UNISDR as a model of how a Global Organization can successfully collaborate with a Regional or Sub-Regional Organization by finding common threads that allow the expression of shared goals and a common rallying theme of resilience. "As we seek to deliver Regional Public Goods and Services to the people of the Caribbean we must seek to harmonize our efforts to ensure that the Caribbean Community is able to maximize on the benefits that can be derived from donor support", he added.


Mr. Jackson also thanked the ADA for their continued support of efforts in the Caribbean indicating that this is the third round of support provided by the ADA in their contribution to the delivery of the 2014-2024 CDM Strategy Results.

The Disaster Risk Reduction Development Partners Meeting´s objective was to discuss and consider collaboration possibilities among current and planned development partners' interventions in the region with regard to disaster risk reduction (DRR). The Meeting brought together donors and partner agencies working in the Caribbean. This event was organized by European Union and the Caribbean Disaster Emergency Management Agency (CDEMA).