The focus of this years International Day for Disaster Reduction (IDDR 2015) is on recognising and raising awareness of the contribution of traditional, indigenous and local knowledge to building resilience of societies. It also seeks to highlight approaches for engaging local communities in the implementation of the Sendai Framework for Disaster Risk Reduction.

This focus is aligned with the second priority area of the Comprehensive Disaster Management (CDM) Strategy and Framework 2014 to 2024 which is the Caribbean region’s vehicle for the realization of the imperatives of the Sendai Framework. Within this priority outcome, “Increased and Sustainable Knowledge Management and Learning for CDM,” outcome 2.3 speaks to the improvement of the incorporation of local, community and sectoral based knowledge into risk assessment. This is closely intertwined with priority area four, “Strengthened and Sustained Capacity for a Culture of Safety and Community Resilience in Participating States.” This outcome emphasises the high value that CDEMA places on traditional and community knowledge and participation in disaster management as it seeks to promote the advancement of more resilient Caribbean countries.

The Sendai Framework in several instances makes direct reference to the need for a strong focus on communities and indigenous peoples. In particular; Article 27 (h) which speaks to priorities for action at national and local levels, encourages countries to “Empower local authorities, as appropriate, through regulatory and financial means to work and coordinate with civil society, communities and indigenous peoples and migrants in disaster risk management at the local level.”

There are groups of indigenous peoples which remain within some of the CDEMA Participating States, such as the Commonwealth of Dominica, St. Vincent and the Grenadines, Trinidad and Tobago, Guyana, Suriname and Belize which maintain a strong sense of identity and even language. However, these are not widespread, and in many instances, these groups are well integrated into society. Nevertheless, even in those countries where none of the indigenous people have survived, they have provided a legacy of being symbols of Caribbean identity and of a strong connection to and responsibility for maintaining the natural environment which supports our livelihoods and our development.

In the Caribbean, disasters and climate change are significant challenges to these livelihoods and development, as we are known to be positioned in one of the most vulnerable regions of the globe. The current CDM Strategy is more strategically aligned than previous iterations with climate change adaptation and as such is positioned as a vehicle for implementation of this agenda through an integrated risk management approach.

Recent events are indicating that this climate phenomenon is producing more extreme events as occurred in the communities in St. Vincent, St. Lucia and Dominica which were significantly impacted by a super frontal system on Christmas Eve into Christmas Day 2013. In recent months, we also witnessed the passage of Tropical Storm Erika which caused devastating flooding and landslides in the island of Dominica, and Hurricane Joaquin which resulted in significant flooding and damage to housing in the Bahamas.

Some of the key lessons that these events have been teaching us is that the culture and level of resilience of communities will determine how severely impacted they will be, how quickly they will respond and how fast they will recover. What we are seeking to achieve therefore are communities with a good understanding of the risks to which they are vulnerable and which have put plans into place to monitor and reduce those risks and enhance their resilience. Community Resilience is defined as the capacity or ability of a community to anticipate, prepare for, respond to and recover quickly from impacts of disasters. It is also defined as the ability of a system, community or society to resist

In the Caribbean, we have recognised that communities have significant local knowledge of the environment and climate, including changes which may have been experienced over a period of time and even why those changes have occurred. Communities also have knowledge about how they have been adapting to those changes. Even further, they have an important role to play in responding to emergency events. In view of this, CDEMA, has been seeking to broaden community self sufficiency in preparing and responding to emergency events, through the promotion of Community Based Disaster Risk Management (CBDRM). CBDRM offers communities a more comprehensive approach to achieving resilience and provides an opportunity for communities to engage and to contribute to sustainable community development through an understanding of the hazard, vulnerability and risk interface.

One of the key aspects of the CBDRM which CDEMA has been advancing is the development and implementation of its Community Emergency Response Team (CERT) training programme. The CERT training programme aims to raise the level of knowledge and awareness of persons within communities about preparedness for hazards to which their community may be vulnerable, and to train them in basic disaster response skills, such as fire safety, light search and rescue, team organization, and disaster medical operations.

Using the training learned in the classroom and during exercises, CERT members can assist others in their communities in the aftermath of an emergency until professional responders become available to provide support. CERT members can also assist with non-emergency projects that help to improve the safety of the community.

CDEMA considers its CERT training programmes and the development of CERTs within the Participating States to be a regional good practice in engaging communities in disaster preparedness and response and in building resilience of communities to disasters.

On this IDDR day 2015, CDEMA takes this opportunity to highlight and celebrate those communities within the Participating States which have been taking active responsibility for understanding and managing their disaster risk, particularly those which are committed to maintaining their CERTs, demonstrated through ongoing training and community outreach. We also encourage the support of national, regional and international partners in this area as a positive and realistic approach to emergency and disaster situations to help to save lives. 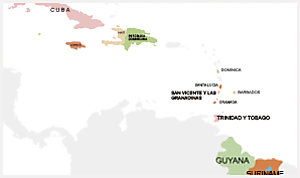